You are here: Home | Jordana Levine

As much as I hate to admit it, I am a full-fledged worry wart. I worry about not making deadlines, I worry about not making every result perfect, I worry about disappointing authority figures; heck, I have even caught myself staring up at the ceiling at night fretting about fretting itself. And while the neurotic musings that bounce and tumble about in my brain never do quite make it out of my cranium and into reality, they do not present themselves without purpose. Rather it seems as if my habitual nervousness is the fuel that I thrive off of, the energy from which I derive pro-activity. Being nervous motivates me to DO, because only once I make things happen and happen well does this worry leave me; it is a moral compass of sorts, and I am grateful for my nerves in this way. So, when familiar Worry came knocking at the doors of my consciousness today– as my trip to Costa Rica is just three days away– I immediately knew two things with utmost certainty:

Okay, so that second realization may have been slightly unexpected, but please do allow me to elaborate.

Besides reading really great books and walking my lovely dog, Lucky, one of my absolute favorite things to do is to parade around the house performing ear-shattering renditions of songs by my two most beloved artists, Frank Sinatra and Dean Martin. I simply adore them; their undeniable charisma, charming senses of humor and boundless talent have become so familiar to me now through watching and listening to their performances over and over that they bring me a strong sense of comfort, no matter how unsettled I may feel.

Once when my mother was out of town and I missed her terribly, one medley by Frank and Dean came to mind and comforted me right away: 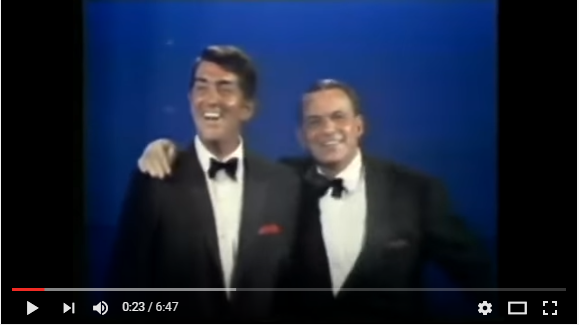 The lighthearted lyrics and playful banter which I have memorized by heart seem to dissolve the impending gravity of most any situation; like a teddy bear, they are familiar and hold sentiments of contentment for me.

I have never traveled outside of the country, let alone all by myself, so there is no doubt that comfort is the very thing I will need as I embark on July 6. Therefore, along with the t-shirts, sandals, sunscreen, and toiletries that comprise the most basic traveling selection, I will also be packing with me the Youtube videos of Frank and Dean’s medleys that I cherish so dearly in times of worry (Since internet connection is not so guaranteed during my trip, I can thankfully still access the clips offline through Youtube Red).

Knowing that I have this source of comfort joining me on my travels encourages me to leave behind any fears of loneliness or uncertainty. I know that I will be surrounded by kind, wonderful, caring people during my trip, and I am so thankful for that.

So, yes, I am a worry wart, and I realize that for me to expect myself to leave that fact behind during these ten amazing days ahead of me is very unrealistic. I will probably worry from time to time, but efficiently so–in the way that I always do that propels me toward my goals. I leave for Costa Rica in just 3 days, and with the dependable comforts of Frank and Dino with me, I am positively ecstatic. read more →

On the Importance of Context and Conservation [Jordana]

Costa Rica is known for its lush rainforests, pristine beaches, and magnificent array of wildlife species. As one of the people fortunate enough to be able to travel to this gorgeous Central American country this coming July, it is important for me to know the context of my visit, for without the well-rounded perspective that comes from context one cannot fully understand nor appreciate their circumstance.

Therefore, when I visit the incredible Manuel Antonio National Park with my fellow travelers, awed by the pure majesty of the monkeys, geckos, sloths, frogs, and parrots all living together in harmony, I will know that this breathtaking display of peaceful coexistence did not come by chance, but by the efforts of the Costa Rican people to conserve.

In December of 2012, Costa Rica became the first nation in Latin America to take a stand for animal conservation when their Congress voted unanimously in favor of a law banning hunting as a sport. A grassroots initiative collected 177,000 signatures calling for this ban on hunting, proposing it to Congress back in 2010.

Under the law, hunters face up to four months in prison or fines of up to $3,000, and penalties are also included for those caught trapping wild animals such as jaguars or parrots to sell as exotic pets on the black market.

Many people have responded in support of the ban, taking to Twitter to applaud Costa Rica with words such as, “Bravo, Costa Rica!” and “I hope the rest of the world will follow suit…” These people see the law as a necessary move to preserve the nature that man seems to constantly overpower, one woman’s comment on Facebook saying, “The animals were here first.”

Not all, however, have been so glad to see this ban. Ricardo Guardia, president of the Costa Rican Hunters Association and an attorney who wrote the national gun law, argues that “hunting is a reasonable use of natural resources that doesn’t harm the general public”.

The law does allow hunting in two special circumstances—subsistence hunting by indigenous groups and culls to control overpopulation. But Guardia says that “people will not respect [the law]”. Another Facebook user commented in agreement to Guardia’s claims, saying, “…just like prohibition, making something illegal will not stop poachers and criminals”.

Unfortunately, these men are not entirely incorrect. In June of 2013, photos taken near Santa Rosa National Park circulated the internet, showing a slain jaguar’s limp body held up by two of its hunters as they beamed in pride. Again in October of 2013, animal conservationists were appalled when pictures of a dead doe and fawn near Carara National Park went viral. Despite the fact that the law cannot prevent all tragedies such as these, Alonso Villalobos, a political scientist at the University of Costa Rica, says even if the hunting ban is not implemented perfectly, the law is symbolically important. Costa Ricans think of themselves as “people who are in a very good relation with the environment,” says Villalobos. “And in that way, we have made a lot of progress. We have a stronger environmental consciousness.”

Context. I can never truly know all of it before I go to Costa Rica, but to know of something that is so important to them now–a passion for conservation that seems to help define Costa Rica’s patriotism– helps me to be able to visit them more respectfully.

Socrates once said, “The more I learn, the more I learn how little I know.” And the more fantastic things I learn about Costa Rica, the more I feel completely ignorant–yet, in the best way possible, for this marks the opportunity for new growth and wisdom. It is as if my hands are outreached, ready to pick the delectable fruit of experience from the tree of new beginnings. I am going to Costa Rica in exactly two weeks from today, and I am not even close to knowing everything about that faraway land. And I could not be more thrilled.